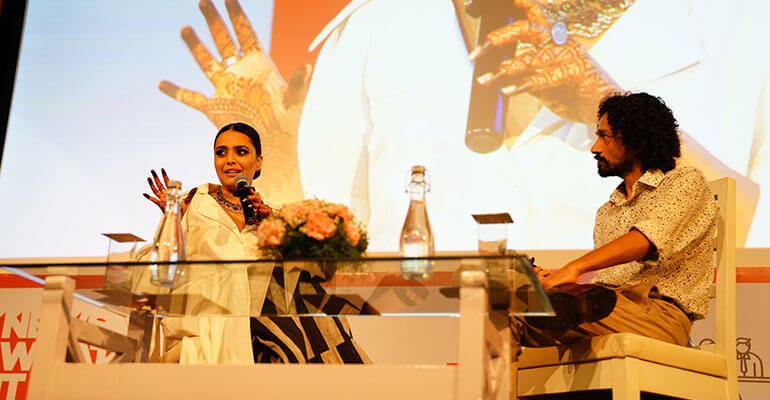 Swara Bhaskara walked onto stage on the first session of the second and last day of the 3rd edition of The Media Rumble amidst applause and praise for her outspoken presence on social media and acting roles that defy traditional representation of women in Bollywood. Asked about how widespread the presence of women in Bollywood is now as compared to the past, she replied that while women have been behind the camera from early days, there is no doubt that the power dynamics have been skewed and remain so.

She narrated an anecdote to illustrate the treatment of female characters in storytelling in the industry. “For the longest time, you would never have a female character doing anything at the expense of the hero. And that is changing now.”

Why does she continue to be so opinionated on social media despite the vicious trolling that she faces? She responded saying that in the beginning she did not realise how organised the trolling was. But now she feels that social media platforms are like public spaces. And just like one expects civil behaviour on the streets, there should be an etiquette in electronic public spaces. “Why should we cede these spaces to people who are noisier or potty-mouthed? If we ignore them, the message that goes out is that it’s ok to be abusive and that you will get away with such behaviour.”

Commenting on the institutionalised condoning of such abuse she said, “As a society we are inured to gender violence and our films continue to show casual violence as love. We show domestic violence on screen and have dialogues like ‘maarte hai par pyar bhi karte hai’. This mindset needs to change.”

Asked about consequences or legal steps that could be taken to counter the ill-effects of trolling, she said that trolling is an easy and anonymous way to harass people. But the current establishment has made trolling of their naysayers into an organised industry with a definite agenda of harassment. The legal process needs to include ways to punish such offenders.

Has her commercial viability been affected by her outspoken behaviour? Swara responded with a firm yes. “I’ve seen cagey reaction from film producers and brands.” She described how her association with certain brands have led to immediate reactions by trolls with a #boycott’brandname. Brands are made to pay for their association and it is logical that a loss of business would make producers and brands wary of roping her in.

Is there any wisdom in not being so opinionated? She said, “Shouldn’t we all be speaking against incidents like Unnao or Kathua? There will always be a consequence. We need to decide for ourselves as individuals, what price am I willing to pay to speak up.”

How will gender depictions change in Bollywood? We continue to get movies like Kabir Singh which do well in the box office. Swara closed the discussion by saying that the one thing that Bollywood understands is numbers. A film genre that does well will continue to lure producers. “The best way to show Bollywood that we don’t want to watch misogyny on screen is to not watch these films.” There is hope that on the same week that Kabir Singh is grossing money, a film like Article 15 does several crores as well. When mainstream Bollywood discusses issues of importance like in Article 15, with an A list actor in a leading role, that is a silver lining. “So just go and watch all those “chhota” films!”

As the session wrapped up, Ravish Kumar, the just-announced winner of this year’s Ramon Magsaysay award walked in amidst thunderous applause and a standing ovation. Swara Bhaskar was invited to ask him a few questions. Ravish said that the section of the media that still believes in honest news needs to continue to do so. He blamed certain television news channels for vitiating the atmosphere. These channels target individuals and groups on the strength of the support that they have from the government. This is a new phenomenon that news anchors enjoy support from the establishment that allows them to be brazen.

Swara raised the question of legitimate news channels broadcasting fake news to create hysteria. Ravish responded categorically that this will not change till the current political atmosphere changes. He said that the government is using television as an extension of their political agenda. Communalisation is being legitimised and fear is being created through propaganda against minority groups. Social awareness needs to be increased against this trend. Otherwise this will be deeply ingrained in our younger generations and the real issues will get buried under such sensational news of bigotry, xenophobia and jingoism. In addition, such channels are being sponsored by big corporate houses. It is not a question of TRPs alone but that corporate houses have become communal and therefore ethics have disappeared.

Closing the session with a statement of hope, Ravish said that if the media continues to speak the truth and communicates to its audience with compassion, there is the possibility that people will change. “My first congratulatory note on WhatsApp was from my first troll of several years back! If that’s possible then anything is.”