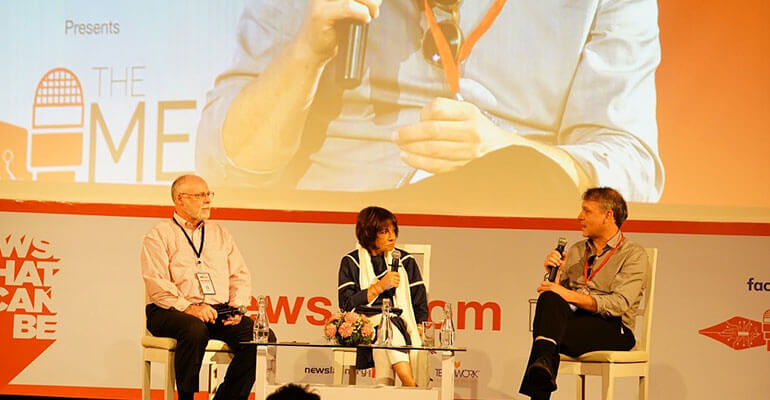 Madhu Trehan, co-founder and editor-in-chief of Newslaundry, was in conversation with Brian Knappenberger, award-winning documentary filmmaker known for The Internet's Own Boy: the Story of Aaron Swartz and James G. Wright, senior editor at the Crime and Corruption Reporting Project based in Sarajevo, Bosnia and Herzegovina. Madhu started the session by introducing Nobody Speak, a film directed by Brian Knappenberger on Peter Thiel successfully bringing down Gawker media which had exposed him for being homosexual 12 years earlier.

The idea behind the making of the film, Knappenberger explained, was the ‘bizarre, salacious trial’ going on around the case of Gawker media publishing a sextape which involved celebrity Hulk Hogan. ‘The case was fascinating because Hogan sued Gawker media, testing the bounds of the First Amendment of the American Constitution. After we had started filming, another figure entered the picture. Thiel, an American billionaire and Silicon Valley icon, had secretly funded the Hulk Hogan lawsuit. And that made me think about how billionaires could wield their money to influence and silence publications that they don’t like’.

The second part of the film focused on James G. Wright’s work on the case of the Las Vegas Review Journal which was bought by casino mogul Sheldon Adelson, while keeping his identity a secret. ‘When the staff asked a new frontman about the owner’s identity, they were told that they didn’t need to know and saying that to journalists is like throwing red meat in front of lions,’ said Knappenberger. The day the story was published, it went from nothing to half a million hits instantly, indicating that people cared. Anonymous ownership of a newspaper is a serious issue which empowers the owner to use and abuse, produce propaganda, report only what they want or protect themselves from scrutiny.

A quick question to the audience revealed that the majority didn’t know the Hindi word for ‘privacy’. According to Madhu, ‘In Indian culture, we don’t really value privacy. Edward Snowden gave up his life to inform the American people that they were being ‘spied on’, but such a figure wouldn’t have emerged in India where there are no laws on privacy and people are not so fussed about being snooped on as the American people.

James agreed that privacy is ‘one of the biggest issues of the day in the US, and that the Constitution of the United States, specifically the Fourth Amendment protects us against illegal search and seizure’. Edward Snowden basically revealed that the government was conducting a dragnet surveillance of American citizens, specifically after 9/11, in order to find the ‘needle in the haystack of crime or terrorism’. Wright’s organisation had a hand in sorting out the Panama papers and according to him, ‘we would never take a private citizen who did nothing illegal and hold up their finances just for the titillation factor’. ‘The key determinant,’ he said, ‘is to ask ourselves if there is a greater public good or a crime being committed which is not being addressed. There has to be a strong public reason for looking into someone’s private life.’